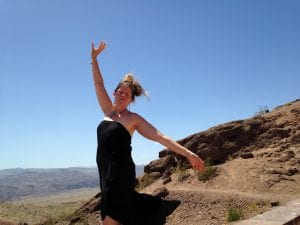 I drove Team TLC 3,400 miles. Thursday, July 7, 2016 through Saturday, July 16, 2016 I drove 3,400 miles roundtrip to attend the Chromosome 18 Conference – Reno, Nevada to San Antonio, Texas .. 1,700 miles each way. A conference Thomas and Lillian have their hearts set on attending every year. We began attending the C18 Conference in 2009 when it was in Las Vegas and have gone every year since then.

We arrived home at midnight on Saturday, July 16th. I was kind of it out of all day Sunday. Then Monday, I woke up ready to go! By Monday afternoon, every muscle in my body ached and I felt weighted down. I was completely out of it for 4 full days. It took about 7 days before I felt like myself again.

The plan was to leave at 5:00 am on Thursday, the 7th, so that I could drive as far as possible before darkness fell upon us. I am completely out of my comfort zone driving in the dark in unfamiliar places. I could not get to sleep the night before. I was worried and having anxiety about this trip due to finances, honestly, not even having enough to cover the trip.

Yet, I know how deeply important this conference is to Thomas and Lillian. Each for their own reasons. Thomas is the sibling to a sister who has a chromosome deletion. He has, and is, developing deep friendships with the other siblings his age and being mentored by the older siblings.

Lillian’s friends are her peers that she has connected with through this conference. She communicates with some of them all throughout the year. When one texts, blogs, post on Facebook and Instagram, emails, chats on Facebook, or uses skype; the spoken word is not needed.

In our world of verbal communication difficulties, social media has helped create a world that would not exist for Lillian and one where she has true friends. She has no local friends, yet she has friends all over the United States and the world … As far away as Tasmania, Australia. 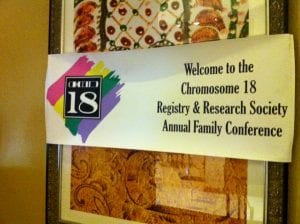 After having about 3 hours sleep, I could not seem to get ready as I was overwhelmed with the enormity of this trip. I had an adult meltdown which delayed our departure. We were finally on our way at 7:00 am; two hours later than I had planned.

There was much excitement as we began the road trip. Lots of talking, observing the landscape, and silliness. About two hours into the morning, we lost cell phone service due to the rural area we traveled. We were without cell service for the next five or six hours until we reached Las Vegas. During this time, Thomas and Lillian became absorbed in reading books, magazines, or using their computers or phones.

Thoughts of us being stranded due to car problems kept entering my mind like a dark storm cloud encroaching on the brightest of days. Thoughts of the lack of finances for this trip took their turn in the dance also. Not to be left out of the dance, thoughts of my insanity at attempting this cut into the dance too. All of this dance to be completed with the veil of anxiety and worry weaving in and out like a breeze blowing through the trees.

Thankfully, I am a student of mindfulness and emotional connection. And, since there was nothing else to do but sit and drive, I took this opportunity to put these practices to work. It was a rapturous dance between being mindful, connecting with emotions, and embracing the fear wanting to dance with me.

This trip proved to be challenging. I had not anticipated this dance with life in all of its flavors and colors in such a way to cause the suffering brought on by my thoughts. It was my goal to have this trip be a learning experience for me of not knowing, not planning, and just going. That’s certainly not for everyone.

Yet, I felt this was important for me. It’s a huge step out of my comfort zone. One step closer to trusting myself, trusting internal messages, and letting go of how it’s supposed to be done. As mentioned earlier, I’ve never driven this far alone … Much less alone with Thomas and Lillian. In addition to driving this far in Rosey, our 15 year old car, with dancing through this trip on less than a shoe string budget and letting go of worry that the string will hold tight.

I had moments where I was so extremely hot and exhausted I had visions of taking an ice bath and moments when I was so tired I was shaking and wondering what in the heck I was doing ….. Yet, I know. I may not know on the surface right now; but deep down, I know why I do what I do.

This was also a dance full of wonderful, bright moments. We shared inspiring comments and tons of love that furthered each one of us. Definitely some amazing growth for all of us happened! WOW!

We had a ball and laughed tons and enjoyed the beautiful landscape as we drove by it. Lillian was being so helpful and encouraging Thursday morning before we left.

Thomas was awesome and inspiring with his comments as we drove the two lane highways in the middle of nowhere in Nevada and Arizona. We saw a huge sign that read, “Nothing” and had a great laugh about that! Just after driving through Boulder City and Hoover dam, Thomas said, “I love it here.” He was so impressed with Lake Mead and said he wanted to live there.

Thomas went on to say that he always has deja vu and he has lived this life before. He said it all seems so familiar. He was incredibly inspired by the beauty that passed before our eyes. He also commented that he wants to buy land and simply let kids play on the land.

On the first day of driving, Lillian got sick to her stomach. We ended up spending about 30 minutes at a gas station bathroom and Thomas was extremely helpful. When we were looking for a place to stay and it kept getting darker and darker, I apologized to them as I had planned on stopping sooner. He said, “When you get a rock in your shoe, just shake it out.”

Rosey did a pretty good job. She had a wee bit of problems getting overheated but that was resolved with turning the air conditioner off while traveling up and down the mountainous areas. I had to give her some oil and coolant on the way there and some oil on the way back home. It’s scorching hot checking oil and fluids in over 100 degree weather!

With an hour and a half to go before we arrived in San Antonio, the epoxy glue I use for the driver side mirror had enough of the heat and was simply melting away! A couple of years ago I bumped the mirror backing out of a covered parking spot. So, for about 20 minutes I was holding the mirror until I could pull over. Bungee cord to the rescue!! Before we headed back home, the hotel gave me duct tape and that worked great for the ride back home.

I feel strongly guided to be establishing a new relationship with myself and the world and to model this for my kids, have them actively participate, and to help them know that there’s more to life and living than traditionally meets the eye.

I want them to never lose touch with their true self and to grow into adults knowing their given talents and having a solid and clear courage and conviction in sharing that talent with the world!

I continue to learn so much daily … About me, Thomas and Lillian, others and simply just living and dancing with life! xoxo 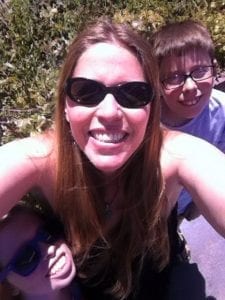 (This post is part of an “I Dare You” series. Go here to see the “Dare” post that began the series and here for the most recent “Dare” post.) 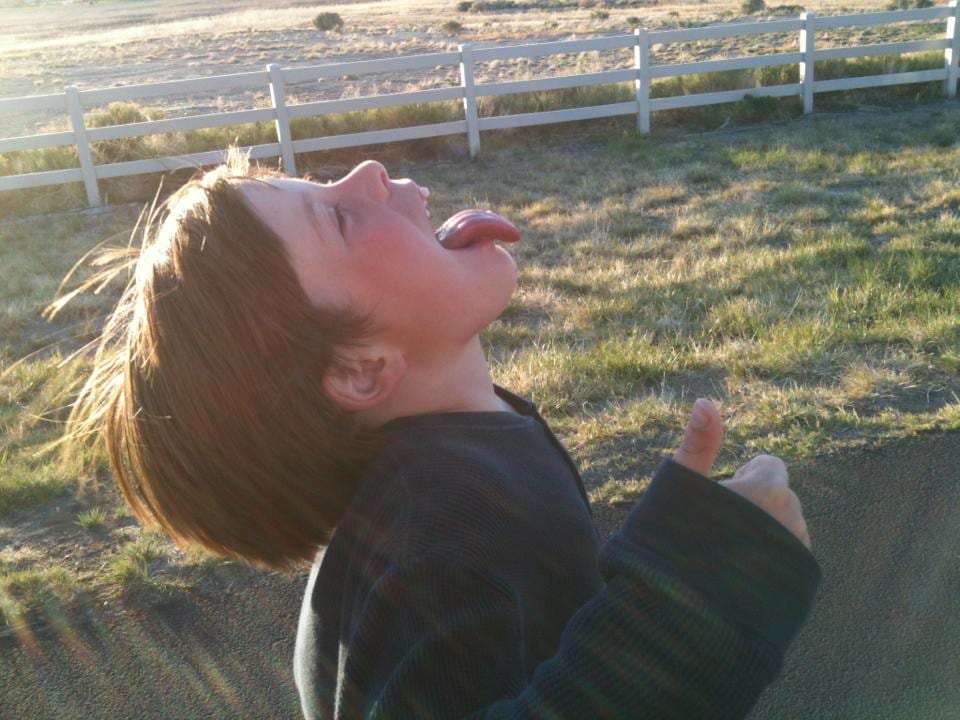 Have you ever tasted the wind? I did for the first time this afternoon, Thursday, April 18, 2013! My 7 year old son, Thomas, and I went for a walk today. He’s doing this and I ask him what he’s doing. “I’m tasting the wind. Try it Mom. What’s it taste like to you?” Tasted like ….. Not gonna tell ya! I dare YOU to go outside and taste the wind!! Hopefully Thomas has started a wind tasting adventure y’all!!!

I help to support my family with my writings. I share my writings for free for the benefit of others. If you benefited from this writing, would you like to toss a tip in the love offering “bucket”? Oceans of gratitude … xoxo

Did you know I wrote a book? It’s titled “D iz for Different – One Woman’s Journey to Acceptance” and you can read more about it here.

This article is now part of my inventory in Inspired Living.

I enjoy taking the time to share information with y’all that I think is helpful and give you ideas to live an Inspired Life. So, if you feel this helped you in any way, toss a tip into the tip bowl on the way out of Inspired Living.

If you can’t afford to donate, please feel free to pass this article along to others who might get some help from it. Thank y’all to everyone who has donated and shared in the past. I don’t always get a chance to respond, and the donations, shares and comments are my indicators that what I share is helpful. Thank YOU! 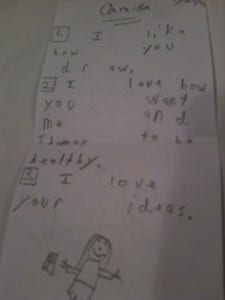 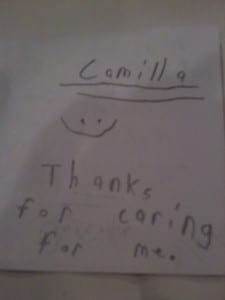 At least once a week Team TLC writes a little short note to each other listing at least 3 things we appreciate, like or praise about each other. I normally keep this to myself. Something urged me to share tonight. Perhaps to encourage other families out there to give this a go in your household. This is a GREAT way by the example of what the parent/adult writes to each child to show them what life and loving one another is really all about at it’s core.

This article is now part of my inventory in Inspired Living.

I enjoy taking the time to share information with y’all that I think is helpful and give you ideas to live an Inspired Life. So, if you feel this helped you in any way, toss a tip into the tip bowl on the way out of Inspired Living.

If you can’t afford to donate, please feel free to pass this article along to others who might get some help from it. Thank y’all to everyone who has donated and shared in the past. I don’t always get a chance to respond, and the donations, shares and comments are my indicators that what I share is helpful. Thank YOU!

Amelia Earhart observed, “A single act of kindness throws out roots in all directions, and the roots spring up and make new trees.” Let the 31 Day Spreading HappYness Tour begin for Team TLC!!! Every day this month we will … Continue reading →