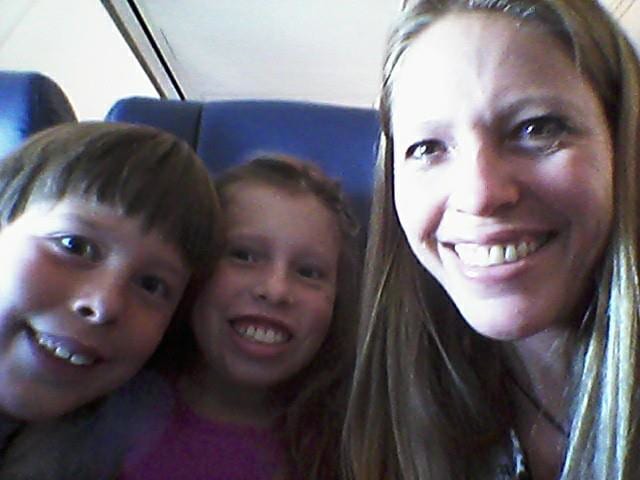 (Team TLC at 30,000 feet up somewhere between Reno and Las Vegas)

That’s how we got from Reno, Nevada to Savannah, Georgia for the 20th Annual Chromosome 18 Conference. Southwest Airlines does not fly into Savannah and the other airlines were triple the price to fly directly into Savannah. Southwest does fly into Jacksonville, Florida which is much closer but that was $300 more per person! I tried every combination I could think of with planes, trains and automobiles. Amtrak was crazy expensive! Even more than flying. Greyhound bus and a car rental were neck and neck from Atlanta to Savannah until you considered gas for the car. Here’s what we ended up with: SW Air from Reno to Atlanta. Greyhound bus from Atlanta to Savannah. Car (via a chromosome 18 friend) from the Savannah bus station to The Marriott! Then the exact same thing in reverse to get us back home again! Whew! 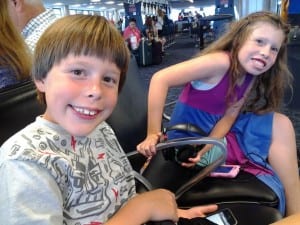 The Team TLC travel adventures to the 2013 Chromosome 18 Annual Conference in Savannah, Georgia began on Friday, July 26, 2013 with an 8:00 am flight from Reno to Atlanta with a stop in Las Vegas to change planes. This was pretty relaxed and fun for all of us. Just one small incident. Lillian spilled her whole cup of juice inside her travel bag on the airplane which was interesting to try and clean up with the little airplane napkins! It would have gone off without a hitch except the juice found it’s way inside of another little bag inside the big bag and “ruined” the special index cards Lillian had decorated for her friends, Katie Baker, Rebecca Parker and IM. She was so sad and upset! 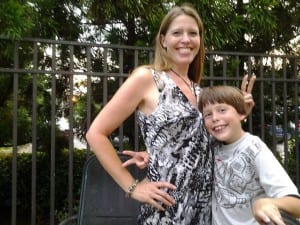 (Thomas and Camilla at our motel in Atlanta) 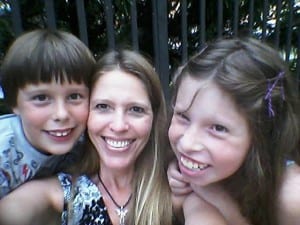 (Team TLC at our motel in Atlanta)

We stayed in Atlanta for the night as the next leg of the adventure was a Greyhound bus ride from the Atlanta airport to Savannah. I figured we’d be too tired to ride the bus to Savannah that same night. We wouldn’t arrive in Savannah until about midnight. This is where the fun turns into a bit more work! Getting through a HUGE airport with bags and one kid who clings to my arm the whole time. Airports freak Lillian out. She has to have a hold of my arm the whole time! We cannot use any stairs, escalators or moving walkways. They are a not happening zone with Lillian. In hindsight, I feel we would have been just fine making the trip that night. I definitely learned a lot with this adventure y’all! 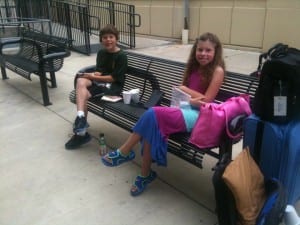 (Thomas and Lillian waiting for the bus at the Atlanta airport) 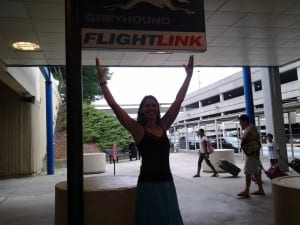 (Camilla waiting for the bus)

Made it to the motel via a shuttle bus provided by the hotel. We ate some dinner, went to bed and got back up pretty early to take the shuttle back to the airport. Greyhound picked us up about 8:30 am and we were Savannah bound via a 4 hour road trip! There were only single seats available and many people were asleep. So we didn’t get to sit together but were very close. Thomas was in front of me and Lillian was across from me. The really cool thing was that we had electrical outlets at our seats and free Wifi! Very neat! 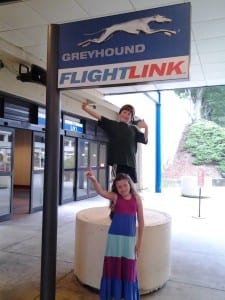 (Waiting for the bus … It was about 30 minutes late arriving) 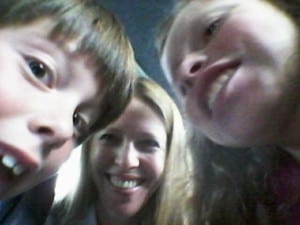 (Team TLC on the bus …. Atlanta to Savannah)

We made one 10 minute stop in Macon, Georgia. This is where the adventure took a notch up! One of the people who got on the bus in Macon was a young man in his 20’s or 30’s who was possibly intoxicated or high on something. He sat behind and across from me.  About 45 minutes before arriving to Savannah this young man decided to tell me about his autobiography he has written … handwritten ….. over 500 pages … and he has it with him. He pulls it out of his backpack and reads a little from the introduction as he tells me that we should all ask for help when we need it. He adds this book will make him a million dollars and he’s on his way to get it published. Throughout this he mentions several times that we should ask for help along the way in life. The book is about his struggles. I’m thinking that this is so interesting. Not his book. But that he’s written this book about his struggles and keeps repeating about asking for help. I was also thinking to myself, “Dude! I don’t think you are done with your struggles yet!” So, then he finally asks me for money. I tell him I have no money to give him and we are only on this trip because other people helped us.

He went back to his seat, then goes to the bathroom and lights up a cigarette! Well, didn’t take long for that smell to make it’s way up front. About 10 or 15 minutes later we took the next available exit, in the middle of no where, at a boarded up gas station so this young man could get kicked off the bus! That was an adventure for sure! Don’t get me wrong. I was not bothered by this event or this man. I feel we are all doing the best we can with where we are in our life. Perhaps he will be done with his struggles one day and perhaps not. Either way, his life is unfolding as it should.

Finally made our way to the bus station in Savannah. Our Chromosome 18 friend, Mark Sogard from North Carolina, picked us up. Made it to The Marriott about 2:15 on Saturday, July 27, 2013! YAY and WHEW!

Thomas was such a huge help on this trip. We still had brother/sister arguing happening …. yet, he helped me tremendously. Love that wise old soul in a little person’s body!! 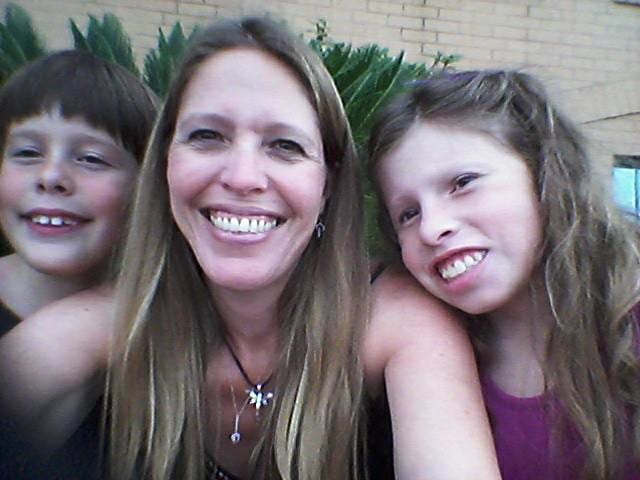 (Team TLC after arriving at The Riverwalk Marriott in Savannah)

Our trip back home was the exact same in the reverse order. Our Chromosome 18 friend, John Baker from Arizona, gave us a ride to the bus station in Savannah. I was a mess getting us and our luggage out to the bus. The ride from Savannah to Atlanta was quiet and uneventful.

Except for an unpleasant experience with TSA at the Atlanta airport, the rest of the trip back home was great. The TSA agent wanted each of the kids to hand their ticket to her instead of me handing all 3 tickets to her. This confused them as we had not had to do this before … especially Lillian. The TSA agent then asked them questions which confused them even more! Some stranger asking them questions about their name and where they are going! Thomas told her we were going to Vegas! Huh? Poor kids! Of course she couldn’t understand Lillian. I told the agent Lillian had a speech impairment and she would not be able to understand her. So she went ahead and asked her even more questions. After that incident Thomas and I were finishing off our water before we made our way to security. This frustrated Lillian even more as she thought they were making us waste our water! Then the TSA agent at the scanner rushed both of them through.

That did it for Lillian. She was holding back the tears. I had to spend 10 minutes after we got our stuff together sitting on the bench just past security calming her down. The whole TSA experience was very upsetting for her.

All was well again by the time we got on the plane and headed for home ….

Something I learned: Don’t sit in the back of the bus!! You will smell scents you never wanted to smell and be prepared to encounter some interesting and colorful humans! AND Some TSA Agents + special needs kids = Frustration and Meltdown

Go here for the first installment and Part 1 of Team TLC 2013 Adventures to the 20th Annual Chromosome 18 Registry Family Conference.

Go here for the last installment and Part 3 of Team TLC 2013 Adventures to the 20th Annual Chromosome 18 Registry Family Conference.