This is a continuation post and the last of the series.

Below is an excerpt from Part One:

Below is an excerpt from Part Two:

” …. Thomas and I considered our options between using an online self-publishing site and using a local Reno publisher/printer. We made a chart listing the costs and pros and cons. We had a meeting with the local publisher. After the meeting we decided to go with the local company. I would do as much as possible and they would help out minimally.

Once we decided to go with the local publisher, I began ….”

Go here to read the rest if you missed it …

“D iz for Different – One Woman’s Journey to Acceptance” was written by me in 2011 and published in 2012. There’s an interesting story on how the book came to be written so if you’d like to read that story go here …

I wrote the bulk of the book in about three months. When I began writing I had no idea how it would get from the initial writing into a published book. Yet, I did not let that stop me from writing. I knew I was to write, so I wrote. Every morning I got up 30 minutes earlier than I had been, sat outside on the patio, with an expansive view of majestic Mount Rose, and wrote for thirty minutes to an hour every day.

It was either during writing the book or just after I had finished that I began researching how to self-publish one’s book. I decided to use Amazon’s self-publishing arm, CreateSpace. Having no money to invest in this book, was a major factor in choosing this option.

I found friends who were willing to be test readers and editors. I had an idea of what I wanted for the cover; yet, during that same time came across artwork that I fell in love with. The art is created by a young man, D.J. Svoboda, with autism who I had been connected with through a mutual Chromosome 18 friend. I was inspired to ask D.J. if he would like his artwork on the cover of my book. He excitedly answered back with a resounding “Yes”! Another friend designed the initial cover for me at no charge. 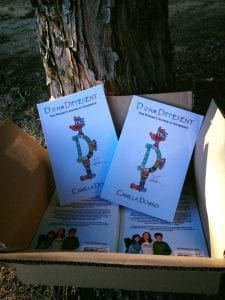 With the cover designed and the book having been reviewed by several others, I dove into Createspace to attempt figuring out how to make what I had into a book! I began to stumble and wasn’t sure how to proceed as it seemed I needed to have Word. I have been an Apple Mac user since about 2000 and have not used Microsoft products since then.

At about the same time, I received a phone call or email from Diana Michelotti to let me know that she is D.J’s manager and wanted to talk about the use of his art on the cover of the book. I contacted Diana and she wanted me to send a few chapters of the book for her review and approval for D.J.’s art.

Not too long after I sent the chapters to Diana for review, I heard back from her that she loved what I had sent and was deeply moved by the content. She wondered who I was going to have edit the book and who would be creating the layout of the book. I told her that I was going to do it myself; that I was stuck for the moment, yet, I would figure it out.

I explained that I had absolutely no money to pay someone for their services. She responded with, “I will do this for you. And, I will not charge you. This is what I do for a living and I want to help you.” She further stated that she believed in the message I was sharing and wanted to help get the book created. 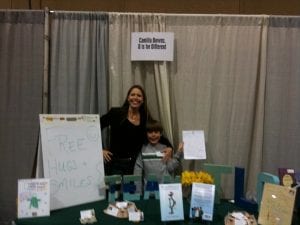 So began the journey of working with Diana. It was a lengthy process as there was much more editing needed than I had anticipated. It was the greatest lesson in patience that I think I have ever experienced. And, I did not handle it in the highest and best way possible, in my opinion.

This was at the very beginning of the huge shift I was beginning to make. A shift of living a spiritually based life; rather than whatever you would call I had been living. I did not see being patient as a lesson at that time. I saw it as an annoyance, something I could not control, and it was bringing forth anxiety and anger. I can see it all clearly now and definitely process these events differently now.

“What a blessing and privilege it has been to work with Camilla Downs and be a part of the creation of ‘D iz for Different.’

Like a bird leaving its nest for the first time – I hope this book spreads its wings, takes flight and reaches those who need to hear Camilla’s inspiring story.” – Diana Michelotti

Less than a year after I began writing it, the book was finally finished and published in May 2012.  And, it was written, created, and published with no money. It was a huge learning experience being the first time I had done anything like this.

Another aspect of the book that came together in perfect synchronicity were the review blurbs. I met the Ziglar family at a conference in 2010 and had kept in touch with Zig Ziglar’s daughter and grand-daughter. When the time came, I asked Julie Ziglar Norman if she would like to write a review blurb. She loved the book and agreed!

A connection I had made through a local networking group approached me one night to say she had been working with someone she thought I should connect with. She connected us via email and after he emailed me back I went to his website only to discover that this person is Jim Stovall!! Author of The Ultimate Gift which was also made into a movie. He was happy to offer a review blurb. I LOVE the movie, by the way!!

There was much I did not include in the book. Not to mention that my writing has evolved since this book and has a completely different flavor now. Don’t get me wrong. I love the book and it’s contents. I still have faith in what I wrote; I can simply see the difference now. The content is mind and brain heavy and not so much from the heart. I barely skimmed the surface of my essence with the book and, in fact, some of my views have shifted a bit since its writing. And, as stated earlier, I have become deeply spiritual since ‘D iz for Different’ was birthed into a published book.

I see it all as part of the process and part of my journey. We all change throughout our lives. Some more so than others. This book was supposed to be “light” and to only skim the surface. It was the toe dip into the author’s ocean for me. A toe dip to test the waters. I am thankful it was met with such a warm reception and enthusiasm.

There is much I wanted to say in the book, that I did not say for fear of offending or turning others away. Fear. What a lesson it has to teach us. I no longer have this fear as one could most likely surmise by reading the writings that currently come forth. Fear is simply love going in the opposite direction and I have tipped the scales so that fear and love have embraced in an ecstatic burst of love creation through writing.

Well, I had not intended all of this to come forth. Yet, there it is. In all it’s grace and glory! Once it turns on, I cannot turn it off until it’s finished!

Back to the book …. The book reached #2 in the Self-Help Category and #1 in Special Needs Parenting on Amazon. The last I checked it had a 4 and 1/2 star rating on Amazon. Sales have absolutely fallen flat and I no longer market the book. In 2013, I let shame and fear that the book was no good take over and I abandoned further marketing.

‘D iz for Different’ is about to receive a facelift by way of a new cover as this cover seems to no longer be in sync with my heart. I love and adore D.J. and this does not speak less of his beautiful art, nor does it speak less of the hard work Diana put into it. This is all about me and what my heart dictates.

So … YES! A book can be published with no money!!

And stay tuned for the updated cover!!

And, stay tuned for the next books to be published. There will be another book coming near the end of this year or beginning of 2019.