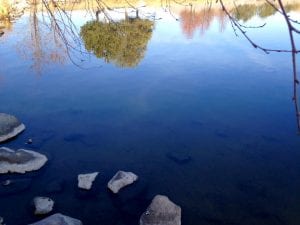 As I begin my 48th turn around the bright and beautiful Sun, I am called to reflect. Come, reflect along with me if you care to join.

My 47th turn around the sun proved to be the most enlightening and wild to date. I knew in December 2016 that this was to be, for I had called this into my life. I was tired of having patterns from my past, happenings from when I was a child, teen, and young adult, and the thoughts in my own mind keeping me from sharing my essence with others, spreading unconditional love and compassion to all beings and nature, and what I came here to do. I was exhausted.

I knew it was NOT going to be fun. Yet, knew I needed to walk into the internal Hell that had held me captive for nearly all my life. I wanted this. I desired it. Nothing else was as important as walking into those flames, feeling them deeply, allowing them to burn away the anger, shame, guilt, and unworthiness; and allowing the Divine within to transmute those biting and burning flames into Pure Love.

My very FREEDOM relied on doing this once and for all. Nothing else was as important. Not earning money for rent, for food, nor for gas. NOTHING!

I began to receive messages here and there in December 2016 that the Theme of the Coming Year was to be “The Shift” with the two underlying themes of “Knowing” and “Allowing”. Below, is the 2017 theme board I prepared in January 2017. You can see at the bottom of the board two phrases “Secrets of the Heart” and “Adventure of My Life”.

Well, the “Adventure of My Life” wasn’t anything like I thought! I assumed I was in for some great fun!! HA! And, indeed, I learned the “Secrets of the Heart”. Powerful secrets that we all KNOW, yet have forgotten, or have buried underneath years of conditioning that caused us to forgot the knowing of our hearts. 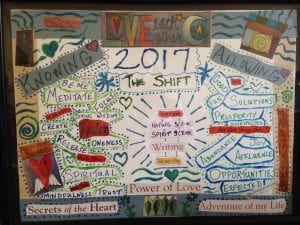 So … I did it. In February I had the great fortune to receive 8 reflexology sessions at no cost; which was paired with Reiki and other energy healing modalities. This is what kicked it off. This was not merely about someone applying deep pressure to pressure points in my feet. These pressure points held the sparks of the very fires that were holding me back. During these two months of sessions, I literally had times I thought I would die from resisting feeling emotions which I dared not ever let myself feel as a child.

See, as a young child I became a master at not allowing myself to feel the weight of horrible happenings. I went into my mind and there I didn’t have to feel. There. Took care of that.

During these sessions I came to know when an old wound was resurfacing as I began to feel anxious. I would go to the bedroom to be alone, lie down, relax, and pray. I prayed that I wanted to remember whatever it was, feel it and that I was ready; that I knew I was never alone, and that whatever this was could no longer hurt me. I simply needed to let myself feel the feelings I had buried.

During these times I sobbed so heavily I thought I may suffocate and I silently screamed as loudly as I could as Thomas and Lillian were in the house too. I let myself get angry about these happenings of childhood. I let myself feel the anger in my guts, in my heart, in my throat. Then, I released into it with sobbing, sobbing, sobbing.

One evening I was deeply anxious and fearful during a connection. I really thought I would simply die from the fear of it. Yet, a peaceful calm overcame me and these words floated into my awareness … “You are not alone. Letting yourself remember this and feel it cannot hurt you. It no longer exists. It is not real. Be Still. And. Know. Be Still. And. Know”.

Those gentle and beautiful words allowed me to remember and feel things I had forgotten and some I did not even know happened for I had buried them so deep as they were tremendously painful occurrences.

The Shaman sessions seemed to be smoothing and balancing. Although there were a few more memories that bubbled to the surface. One incredibly horrific memory. I don’t think I can even describe the freedom of letting these memories and happenings come to the surface, allowing myself to feel the emotions associated with them, and to release them to the divine.

There is a quiet peace that I can only describe as the intersection of having received a deeply relaxing massage and the serene quiet of being outdoors after freshly fallen snow.

In 2017, I joined an online writer’s group that has been incredibly inspiring. I had joined a few writer’s groups in years past; yet, this one is different. It’s like a homecoming for my writer’s soul. Beautiful and amazing people all over the world. They have blessed me incredibly. So much so that the dew of their blessings drips from my eyes and rolls down my cheeks.

In the beginning of 2017 I concluded marketing Thomas’ book, “Biggest Little Photographer“. I took a few months break and spent the last half of 2017 bringing together Lillian’s book, “Where Would You Fly and Other Magical Stories”. It’s official debut is tomorrow, February 27, 2018 and Lillian and I will be on KOLO 8 News at 4:30 with Sarah Johns.

I wrote dozens of poems during 2017 and deeply soulful writings. Now, for goodness sake, I NEVER thought I would be writing poetry. Yet, one day they just started pouring out of me. Actually, the words don’t pour out of me. They flow though me so fast and furious at times that I have to type like the wind to catch them all as they flow through. I actually miss some of the words due to the speed at which they travel!

I have been journal writing for years now. Yet, in 2017, I began to ask a simple question after I was done with pouring my heart out. I ask, “What do I need to know?” The answer that comes forth is always soothing, clears blocks, and provides solutions. Some of these came out as poems, some I later turned into writings that were posted on this blog.

I FEEL different now. I FEEL FREE. FREEDOM. It was always with me. Yet, I simply could not be one with it until I journeyed this path.

I have reclaimed my Wild Woman archetype and actually, at times, totally feel like howling with the moon. Note – NOT, wild as in partying, drinking wild woman. Of course, I had those days, that’s a story for another day though. Simply perform a search for Wild Woman Archetype and you’ll see what I mean.

I do plan to write about the memories that came forth. I have healed from them. They are no longer buried. I have forgiven those involved. I deeply love some of the people involved and some I don’t even know; and I absolutely DO NOT BLAME anyone for happenings of the past. For I know that everyone was doing the best they could with where they were in their own journey of life. That’s a book in and of itself. So, another time for that.

I still have a chink I am addressing and forgiving. I just connected with a piece of it a couple of mornings ago and I feel that’s the last of the big ones! After that, wee little rascals may bubble to the surface; yet, I’ve had a year of practicing. I got this!

2017 and my year as a 47 year old. WOW! Dude! You knocked my socks off! YOU set me FREE!! I am thankful to so many people who have been there for me this past year. I LOVE you all incredibly much. My heart bursts forth with a confetti of love and gratitude for your part in helping me embrace FREEDOM.

2018 is the Year of “Jump” with the two underlying themes of “Listen” and “Trust”. That’s an upcoming blog post of how I came to know that this year I was to LEAP!

I embrace this 48th year with my entire being as a FREE Wild Woman!!