Have you ever felt like you’ve been in a never ending, looping, nightmarish dream? But, you’re not dreaming and it’s all happening with your eyes open and you’re going about your day?

I finally have a minute to share an update with you, beginning with events of the past week and a half. First, I’m thankful for the beautiful, sparkly, feel good blanket of snow this morning. It’s lovely to have reminders from Mother Nature of the beauty of life, being comforted by the loving touch only she can deliver. Here’s a photo at our temporary place, of the snow covered patio and the wonderful view. 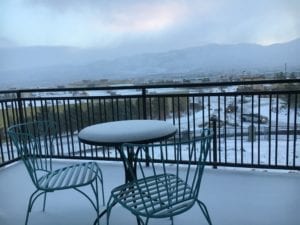 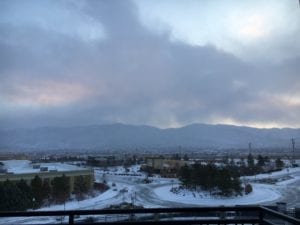 We had to be out of our previous place by November 18th, at the latest, as it had been rented. Management had been giving extensions since August 15th, and in between the last one, our unit was rented. We were supposed to move on the 15th, but learned during the week that it would be Monday, the 18th. On Friday, the 15th, I received a call that we couldn’t get into the place until Wednesday, the 20th. This left us with 3 days, 2 nights of needing a place to stay and a place for our belongings that would be loaded into a moving truck Monday afternoon.

I received a call on Sunday letting me know to hold off on reserving a room at an extended stay hotel as we may still be able to move in on Monday. All day Monday, I was being told that the Certificate of Occupancy may be issued. Meanwhile, we finished packing and loading the moving truck. Not until 5:00 pm was I informed that it wasn’t going to happen, with still not knowing where I would have the movers unload our belongings. And, with still not having a place to stay for the night. Finally received word that I could unload the belongings into the garage attached to the temporary unit. Thank goodness for The Romano Duo and the awesome movers. Not sure how I would have done this without them. Lillian was in meltdown mode from late afternoon until the wee hours of Tuesday morning.

Fortunately, we found a room, got my mom and Lillian into the room and then went back to work getting the last of our belongings from the place we were vacating. There was much back and forth and non stop going, going, going. At precisely 11:58 pm, Thomas and I walked out of our old home for the last time. Mom and Frank had left just a few minutes earlier.

There are many details I’m leaving out. Yet, will share this … By about 7:00 pm, I was so exhausted that I was shaking and kept dropping things. On one of our trips from the old place to the hotel room, I dropped Lillian’s diffuser. Well, I actually dropped it twice. I caught it the first time. The second time, it dropped on the pavement and the lid shattered as it was glass. I totally lost it and began sobbing as I thought of the meltdown that would ensue. Thomas came over and held me in a long hug while I sobbed. I love him so dearly, for how he witnesses me. Thankfully, there was no meltdown as we just used the diffuser without the lid. Whatever! It still works. Just spews water droplets all over.

One more detail. Lillian was melting down over not having a couch in the hotel room. It’s her routine to use the couch for certain things and at certain times. I improvised and convinced her to go along with my idea. I suggested she use one side of the bed as a couch and one side to sleep on. I pulled the ironing board off it’s hook and laid it on the “sleeping” side of the couch so she had a place to put her water and other things.

Tuesday went much the same as Monday. I was told all day long that they thought they would have the certificate of occupancy on that day. It was also a day full of meltdowns from Lillian. Change and being out of her comfort zone are incredibly difficult for her to regulate. They never received the certificate, so another night in the hotel room. I was told the same thing beginning Wednesday morning. The place we were staying didn’t give a sh** about the uncertain situation. They needed to know by noon if we were staying another night or checking out.

I decided to phone the City of Reno Building and Permit Division to find out what was going on. I lucked out and the person who answered the phone was the person handling the situation. She told me the one thing she was waiting on in order to issue the Certificate of Occupancy and gave me the cell number for one of the owners of the project. I phoned him to express my concerns and to ask what the hell is going on. Turns out he had just finished doing what needed done and was headed to the city to deliver paperwork. He phoned me a bit later to let me know he had the Certificate of Occupancy. Finally!!

But, wait. We still had to wait for management to do a walk through of the unit and still needed to sign paperwork. Between all of this, it was nearly 6:00 pm once we got the keys and were inside the unit. Had to get the movers back over to bring a few belongings up from the garage .. our beds, a few pieces of furniture, and some boxes. While Thomas stayed with the movers, I went to get Lillian and the rest of our things from the hotel.

We had opened the windows to air the paint smell, closing them around 9:00 pm. It was then that I noticed the heat was not coming on. Nothing I did to the thermostat made it work. We spent the first night here with it in the upper 50’s in the unit! Fortunately, I own two oil heaters and put one in each bedroom.

HVAC contractor was over Thursday to address the issue. The damn thermostat wasn’t even connected! After much time searching, he could not even find the line for it. He fixed it so that we would have heat until they could come back on Friday and run a new line to the thermostat. He connected the thermostat directly to the heater system in the ceiling; which meant I couldn’t access it and had to decide on a temperature to leave it at. Ugh!

Late Friday morning I went to the post office. On the way back I received a call from the office advising not to return to the unit for a couple of hours as there was an issue with the gas. Ummmm …. my kids are there!! Apparently they knocked on the door and when no one answered, assumed no one was home. (New note added to the file advising of our situation with Lillian and that I homeschool Thomas.) I had to park 2 units away, walk to our unit, with a construction worker, hurriedly rouse Thomas and Lillian, and get out of there! Apparently, a construction worker hit a gas line.

Just as this was happening, I received a call from the HVAC company that they were on the way. Had to tell them not to bother due to the situation. It was 2 and a half hours before we were allowed back into the unit, with another 2 or 3 hours before the gas was turned back on. Which meant that the heat did not get repaired on Friday.

The HVAC guys were finally here yesterday. They had to cut three holes in the wall to run a new line, plus move the thermostat. They left around 2:30. I began to notice that the heat was not coming on. Again, no matter what I did to the thermostat, it wouldn’t work. Called them and out they came again. It’s finally working!! The drywall guy was here until 5:15 repairing the holes. What a crazy time this has been!!

Then, last night at just about 10:00 pm, we got to experience our first power outage in this community. Ugh! Lillian nearly had a meltdown as she was thinking of all the things that she wouldn’t be able to use. Fortunately, it was only off for about 2 hours. I’m so ready for a long run of uneventful days.

The date for moving into our unit was December 2nd. I was informed yesterday that it’s been moved to December 9th. I’m okay with that. I’m just happy to finally be here, even if we aren’t in our permanent unit. We will absolutely enjoy the view we have from the temporary unit, while also enjoying having an attached garage! I’ll have a garage once we get into our unit, it’s just not attached.

Now, to back up to the beginning of this adventure. About 4 years ago, I learned of this new community being built, first of it’s kind in the state of Nevada. I put my name on the interest list. After a couple of years, I assumed it wasn’t going to happen and just let it go. Then, around January of this year, I received a call that I was on the interest list and asking if I was still interested. Yes, yes!!

I was told it would be ready for move in on June 15th. I completed the application, turned in paperwork, was approved, picked out our unit and garage, and the waiting and excitement began. In May, the date got bumped to August 15th. Which was fine with me as my current lease wasn’t finished until August 31st. In the beginning of August it was bumped to September 15th. This went on with bumping it every 2 or 3 weeks … up until now. I am deeply and incredibly grateful to and for management at The Vintage as they worked with me on these continual extensions.

If you’re still here, thanks for reading what I write. I know this was long and included much details. Yet, it’s my nature to share with you what I’m experiencing. Plus, I wanted to have this for myself … as a reminder. During all of this, I kept thinking I was crazy and making a mistake for not walking away. I absolutely would have walked away, long ago, if there were another community like this in our area.

For all of Lillian’s meltdowns throughout these past 5 months about moving, about leaving the home she’d known for going on four years …. Not one complaint, not one comment about the change. She LOVES having her own room and bathroom. Loves it. I knew she would. She also reminded me of something I needed reminded. I cannot remember her exact wording. She said something about the courage and tenacity (my word) it took to stay with this, to get us in here, all the phone calls, everything I did, and continued to do to make this work. I forget sometimes that I have two young people watching how I handle situations, how I live life. At times, I totally suck at handling life, at other times, I suppose I shine, even if it’s after the fact …

Hallelujah! We’re nearly there and I have some great material for a future book! HA! Much love to all of you!